FacebookEmailInstagramYouTube
Namibia After the Rain

Namibia Enchanted after the Rain

Are they mad the Namibians?

When it rains, they freak out.

In Namibia, rain is something very special.

Here, the sun is almost always shining. On average 300 days per year. Of course, that’s due to the special climate in Namibia.

Therefore, the weather is normally not worth talking about. Unless, it rains or it doesn’t rain. Both stirs the inhabitants of this arid country more than the prospect of beach weather excites people in northern Europe.

Have you ever measured the quantity of rain that has fallen in your garden? After every rain shower? Namibians do that with dedication. Namibian newspapers report it on the first page where it rained 2, 7, 20 or even 90 mm.

There’s a Facebook group “Reen in Namibia”, Rain in Namibia. There, each and every dark cloud is shared and discussed. 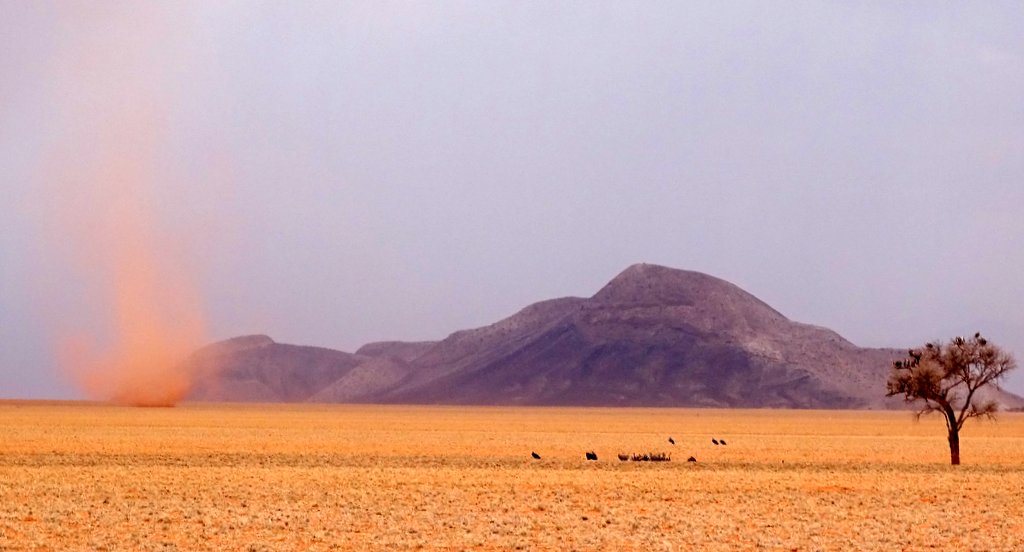 The rainy season often sends it’s harbingers in the form of fluffy cloud blankets at the beginning of summer (around October). Then, the heat mounts, it gets hot and hotter.

Every living being glows in hope of rain.

But, suddenly, the wind direction changes. The south-westerly wind mercilessly chases the clouds back to where they have come from. And the hope for rain collapses. Until the next clouds emerge in a glimmer of hope.

Climate seems to change. Rain often arrives late now. In 2018 it only rained as late as Easter for the first time. When the rain comes late, the whole country is strained with anticipation and hope. And what a relief when the rains finally arrive! 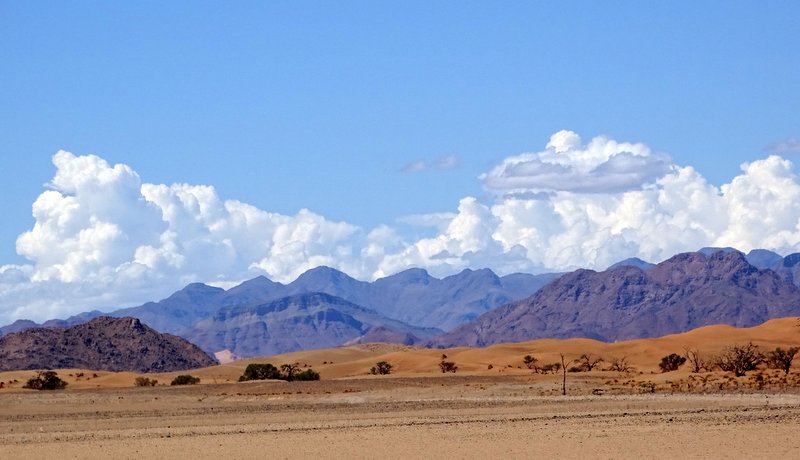 The last exuberant rainy season was 2010/11. For months it rained and rained. All rivers (normally dry rivers) gushed, often for weeks. The land turned into a jungle, roads got washed away. The Swakop River poured into the Atlantic Ocean for weeks. It has not done this again since then.

Ever since, most rivers have remained dry. In some areas the last blade of grass had been nibbled off by hungry animals or been whiffed away by gusts of wind. In many places wildlife had all but vanished and many farmers saw their cows, sheep and goats die or had to slaughter or sell them. A lot of wildlife perished, as the fences prevent long migrations.

Relief after the Rain

In the rainy season 2019/ 2020 the long awaited rain has finally arrived almost all over the country. Even the notoriously dry south got some big downpours mid of April. Only parts of the north west and the south are still suffering the drought. But the worst seems to be over for now.

The reservoirs for drinking water have been sufficiently replenished to last till the next rainy season.

Namibia after the Rain

Normally, you get mostly shades of brown in the Namib desert. Only a short while after rain has fallen, everything looks much greener already! 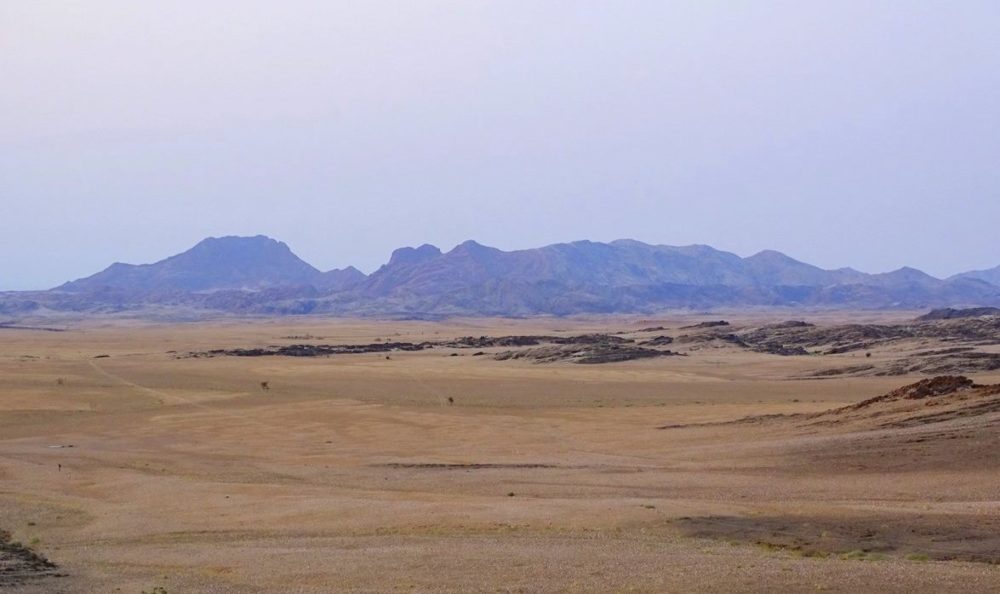 It could even be, that an ephemeral oasis forms somewhere at the normally water-less Skeleton Coast: 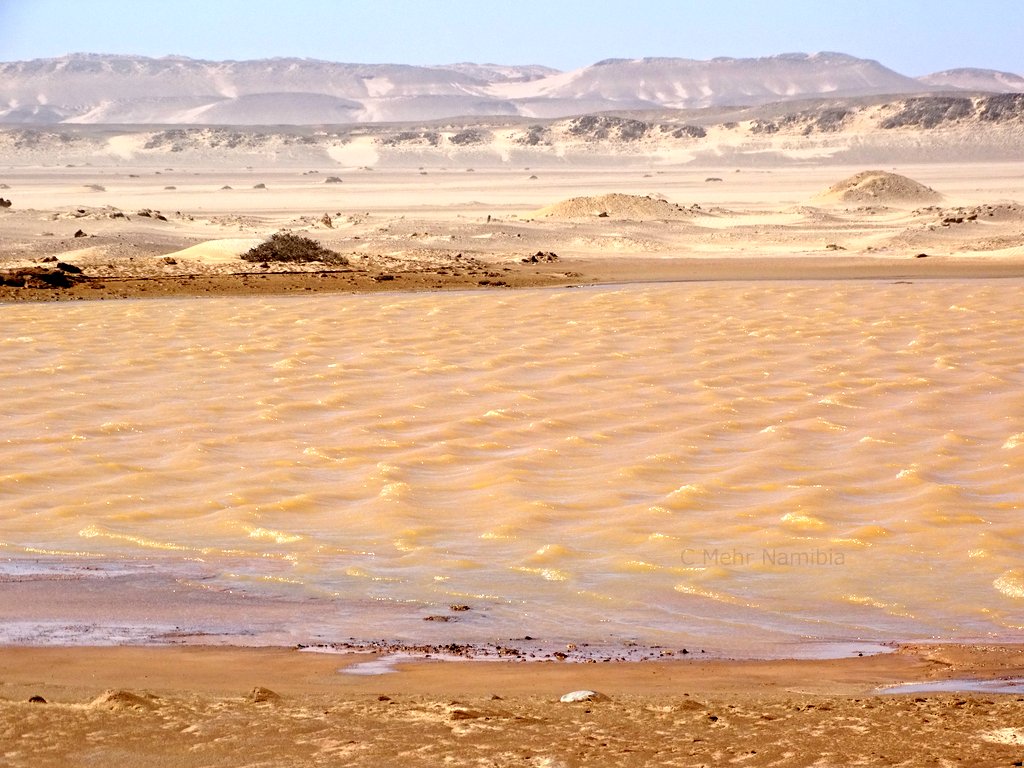 Under exceptional conditions, it could even happen that the Tropic of Capricorn gets inundated: 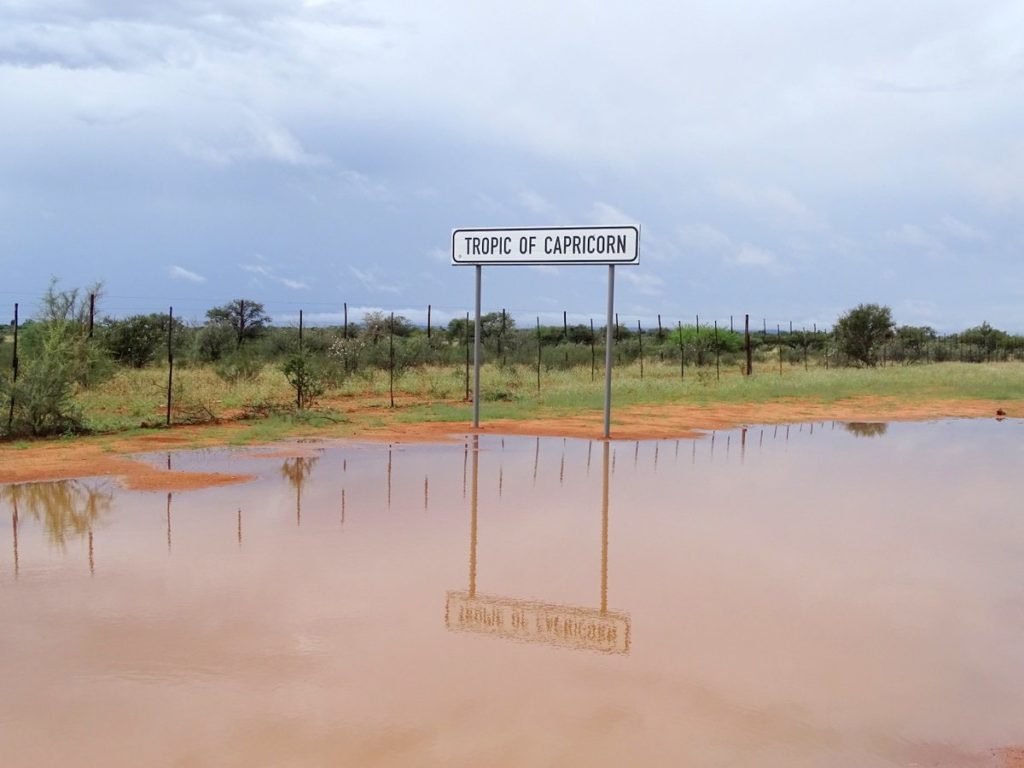 Rivers only Flow after the Rain

Have you every started a barbecue because a river was suddenly flowing through your garden?

Most rivers in Namibia don’t flow. And they are not called river, but Rivier (which is an Afrikaans word for River). When such a dry river starts flowing, then they say the “river comes down”.

In Namibia, that’s a reason to celebrate. Things get packed onto the bakkie (off-road vehicle with a cargo bed), and off they go to the river to “braai” (barbecue) next to its gurgling banks. You don’t get to see that too often, after all. 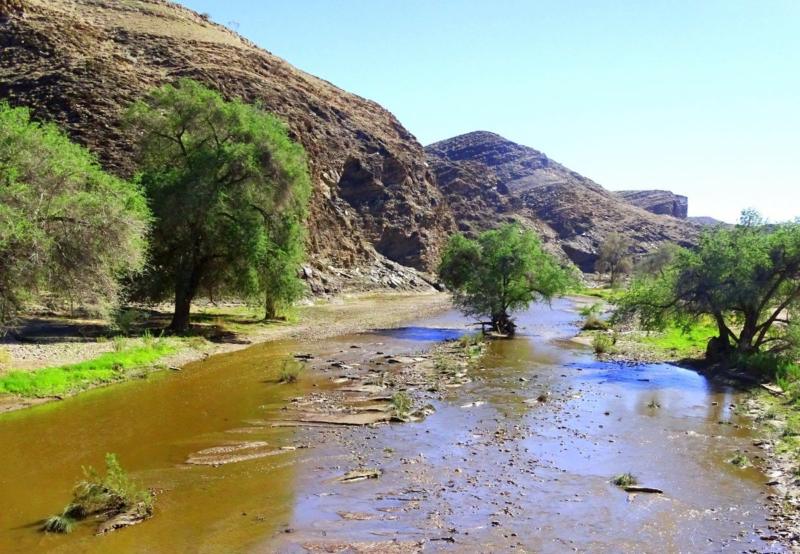 A flowing river can be dangerous for vehicles and campers. Never camp close to a (dry) river and before driving through a flowing river, always check on foot first – if it’s difficult to walk through, the care also will not make it safely to the other side.

Do you still see animals after the rain?

You often hear that the best time to travel to Namibia is the dry season, because you see more wildlife. Indeed, during the dry season waterholes in Etosha National Park often look like this: 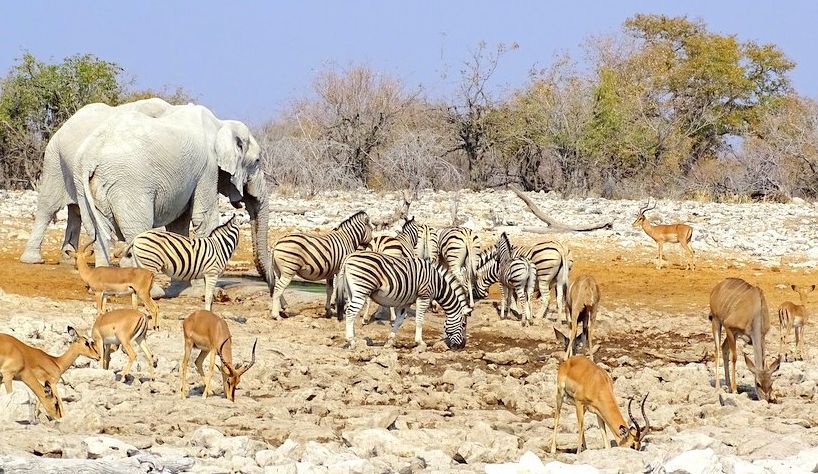 When it has rained, on the other hand, it could be that nobody appears at the waterhole. Then there’s enough water to be found in the bush. Little water pools easily form on the calcareous, limy soil in Etosha.

Then the animals don’t have to waste energy for traveling to the next waterhole. And they don’t have to risk being ambushed and eaten by lions, hyenas or a leopard. 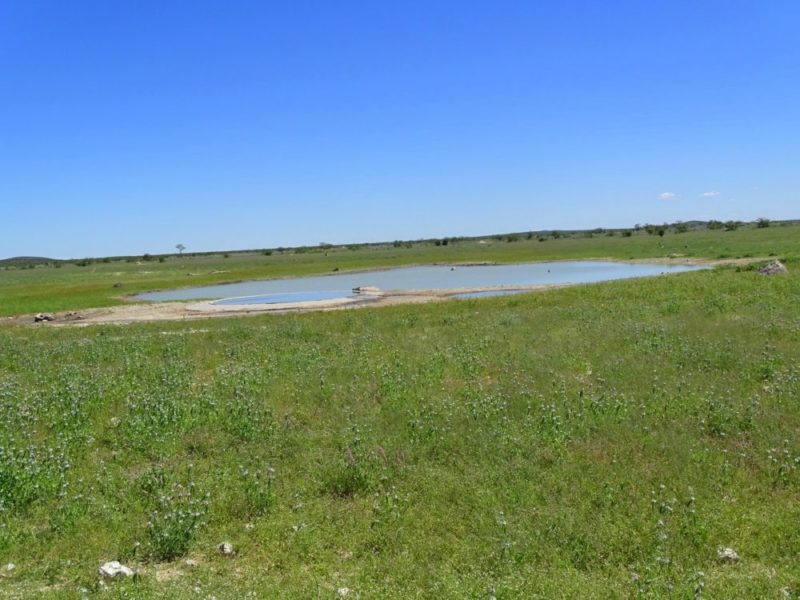 Maybe it’s more difficult to find animals as they are more spread out in the bush and the plains. But, in exchange, you might see giraffes on a carpet of green grass and flowers or you could marvel at young pelicans: 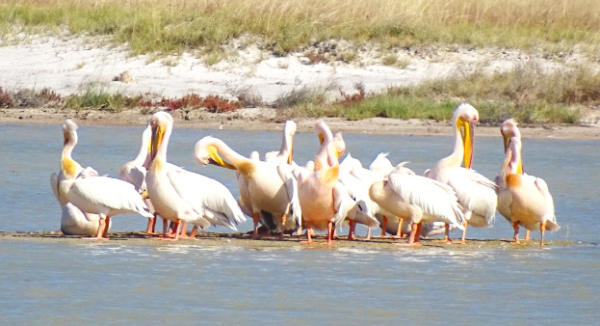 Or, you might be able to observe the extremely rare, highly threatened blue crane (it is estimated that there are less than 40 of these birds in Namibia): 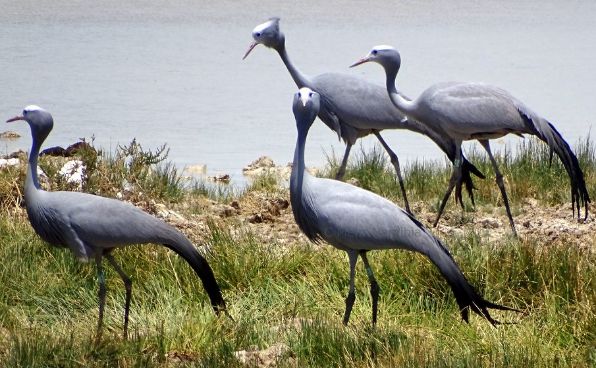 Moreover, lions and other predators like hyenas or cheetah might even be better to observe during the rainy season: 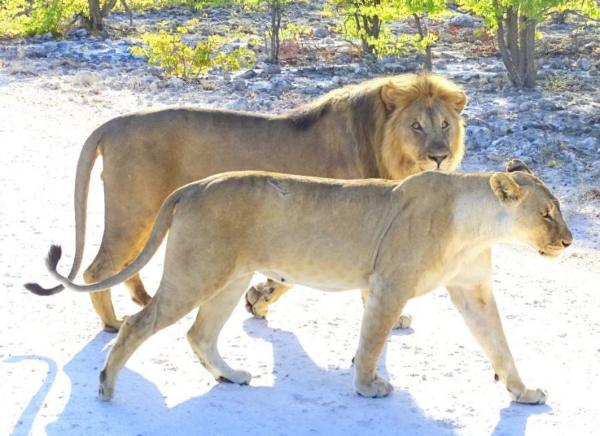 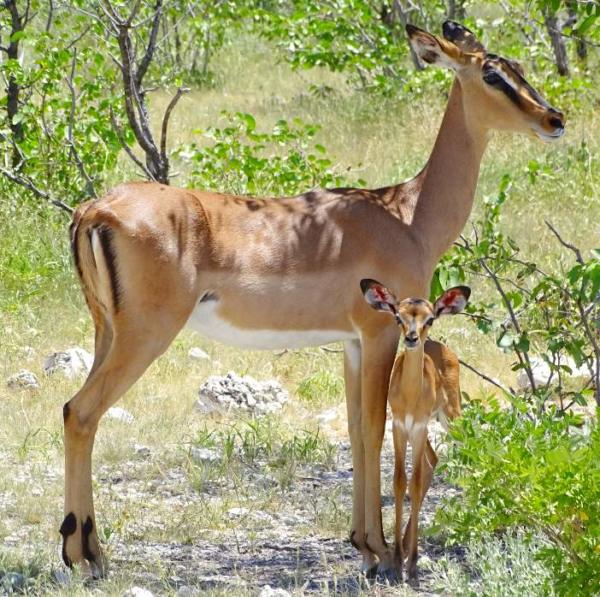 Do you maybe even see more animals?

Outside Etosha, wildlife now sometimes springs up like mushrooms.

Where have these Hartmann’s mountain zebras been during the drought? In Damaraland there are no fences that impede the migrations of the animals. They follow the grazing and the rain. During harsh droughts they might retreat into inaccessible mountains where there are some nibbles of grass left and where they know to find hidden springs. Or they migrate more towards the East, out of the Namib.

Zebras can all but vanish from the area around Palmwag, they can be as elusive as black rhinos. But once the rain allows the grass to grow, they seem to appear out of nowhere and even foal. 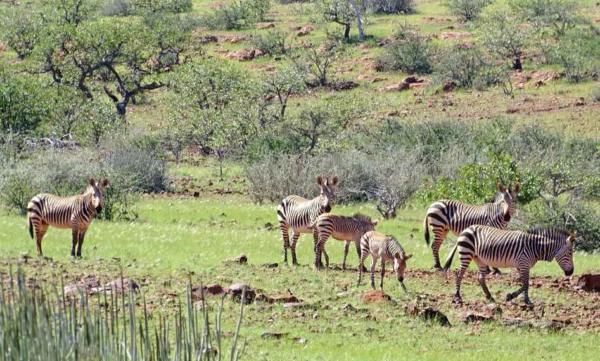 Armoured crickets are quite cute in their own peculiar manner. After the rain, they often emerge in their thousands like little aliens with long antennas: 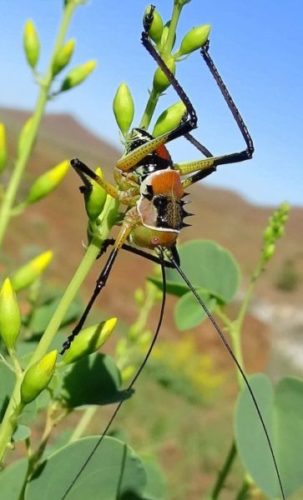 Especially interesting after the rain are the plants

There are a lot of different species of aloes in Namibia. The famous quiver tree is an aloe (aloidendron dichotomum) and graces many postcards and stunning pictures. Below, it’s an aloe zebrina (because of the white stripes or spots) that flowers magnificently in the Palmwag Concession: 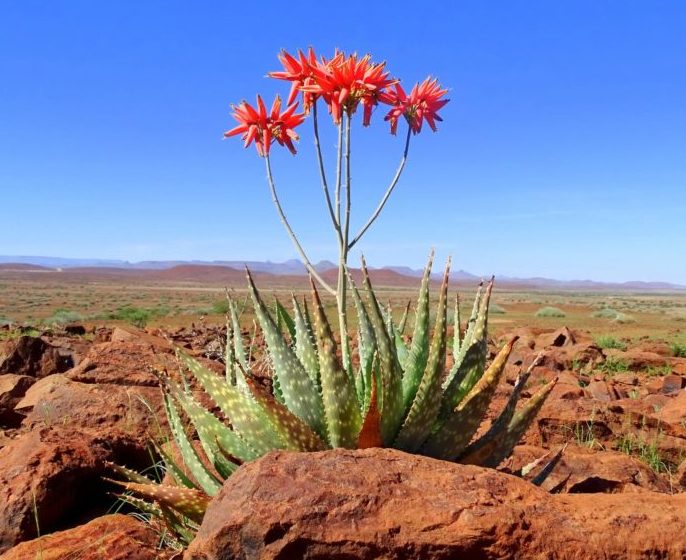 The bulbs of many lily species outlast the dry times underground. When sufficient rain arrives, the plant must flower quickly, before the soil dries up again. 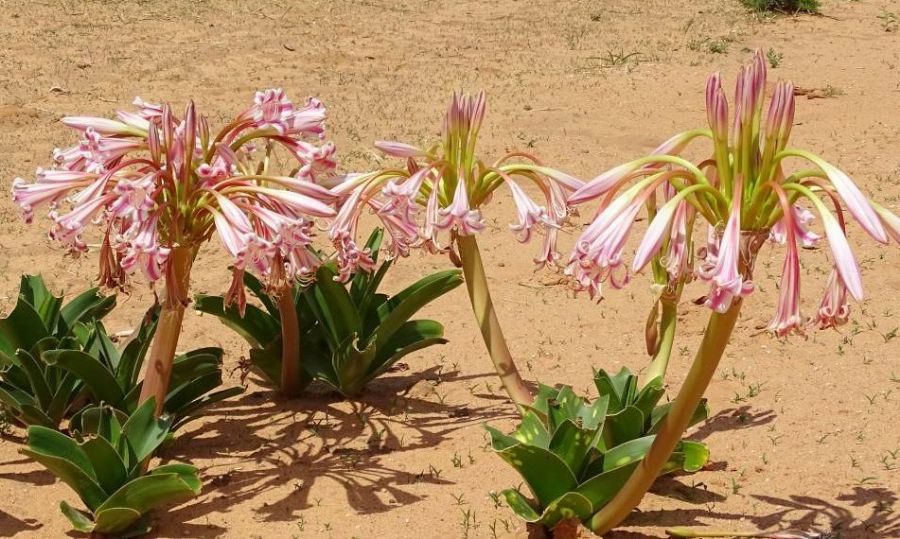 It’s amazing how fast plants and little plants appear everywhere. Many of them hardly anyone remembers to have seen before, or maybe years or a decade ago for the last time. The seeds of many grasses, herbs and flowers can outlast a long time in a Sleeping Beauty kind of hibernation until after many years the next rain wakes them with a wet kiss. 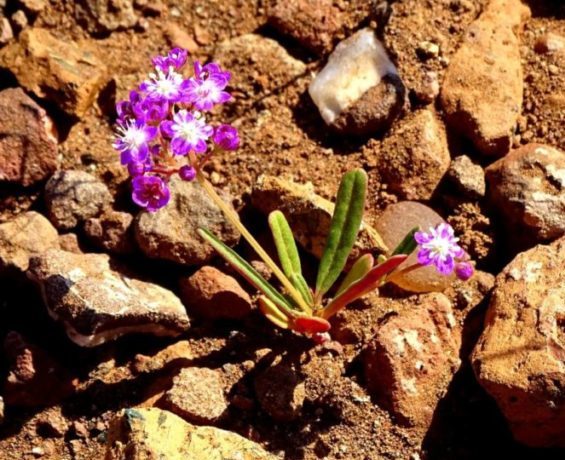 And sometimes, just sometimes, the rainy season brings a big treasure. It’s not gold nor diamonds but a mushroom.

Yes, a mushroom but a very special one. Termites grow it and you have to search for it like a treasure in the early morning. But conditions have to be right, or you’ll search in vain. It must have rained and it must be hot and humid. But even then you won’t always be lucky.

They are called Omajovas, which means something like fool in the Herero language. Scientists call it Termitomyces schimperi. It only grows in Namibia.

In Namibia it’s an extremely famous and sought after delicacy. People drive hundreds of kilometres when there are rumours going round that they are growing somewhere.

But there will be more about Omajovas in another Blog. 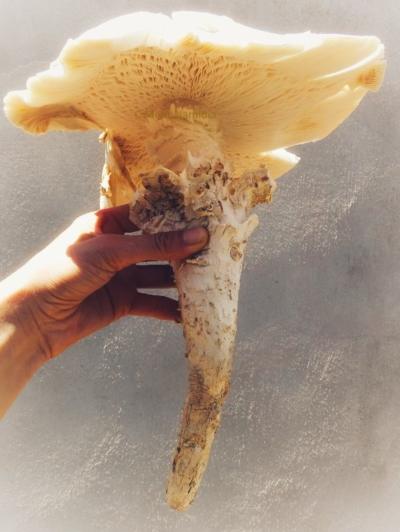 We give you independent advice and are looking forward to plan your dream journey with you!

This Is A Custom Widget

This Sliding Bar can be switched on or off in theme options, and can take any widget you throw at it or even fill it with your custom HTML Code. Its perfect for grabbing the attention of your viewers. Choose between 1, 2, 3 or 4 columns, set the background color, widget divider color, activate transparency, a top border or fully disable it on desktop and mobile.
Page load link
error: Content is protected !!
Cookie-Zustimmung verwalten
Wir verwenden Cookies, um unsere Website und unseren Service zu optimieren.
Manage options Manage services Manage vendors Read more about these purposes
Vorlieben
{title} {title} {title}
Go to Top