The desert lions are the kings of the Namib desert.

Due to conflict with people, they had almost vanished. But they are back.

About 150 desert adapted lions roam the dramatic landscapes of the northern Namib again.

Lions fascinate us with their strength, wild beauty and powerful elegance.

But what is so special about the desert lions?

It’s their home, the Namib desert: the dunes, the wild and cragged mountains and the waterless plains.

The Namib is often relentless but of an alluring beauty. The desert lions have learnt to survive in this world of flickering heat, shivering cold, sand storms and persistent lack of food.

Together, the desert and the lions are a combination that radiates a magic, that captivates many forever. 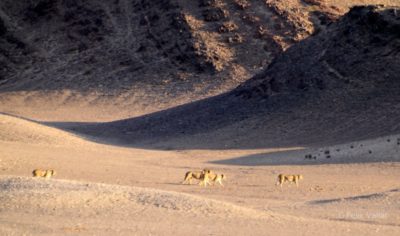 A scientist, Dr. Philip (Flip) Stander has dedicated his life to them. A film team has accompanied a pride for several years („Vanishing Kings“).

And we had the unique opportunity to get an insight into the life of the desert lions by accompanying Dr. Stander for several days.

The famous desert lions had been all but exterminated end of the 80s. Today, 150-200 of these lions adapted to life in the desert roam Namibia’s Kunene Region  (Damaraland/ Kaokoveld) again. Closely linked to their come-back is Dr. Philipp (Flip) Stander, who has been studying them since 1998.

Science for the Survival of the Desert Lions 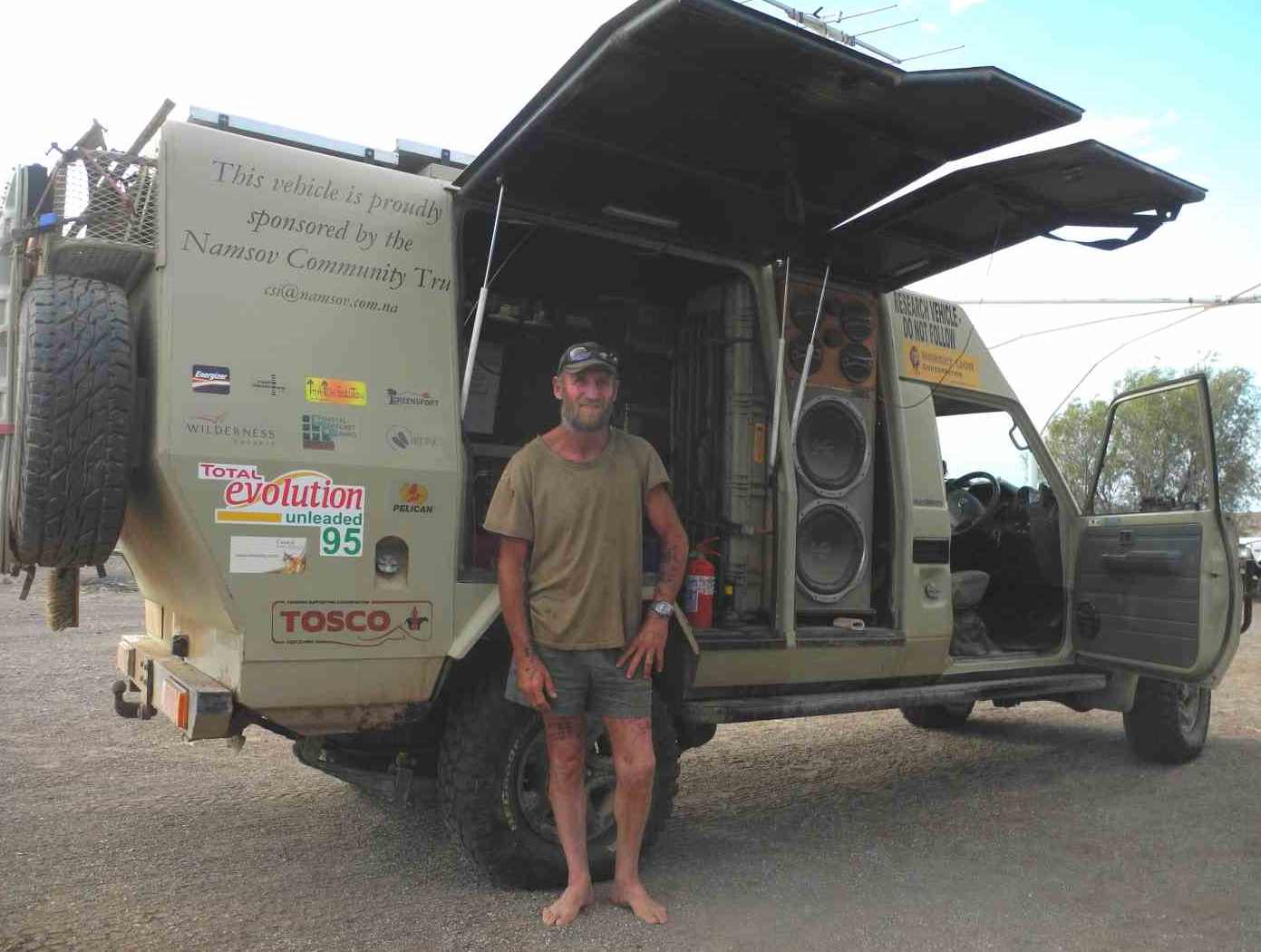 We were in search of desert lions in Namibia.

But first, we were looking for desert lion researcher Dr. Philipp (Flip) Stander. We found him after sunset inside the Palmwag Concession.

While we prepared our dinner, Dr. Stander made for the next hill, to listen for signals of collared lions via the radio system.

Later, he came to our camp fire for a chat. When we went to bed, he went back to the hill to continue listening for lions.

While we indulged in breakfast the next morning, Dr. Stander drove off in search of the lions.

Researching desert lions is a dedication, not a job. 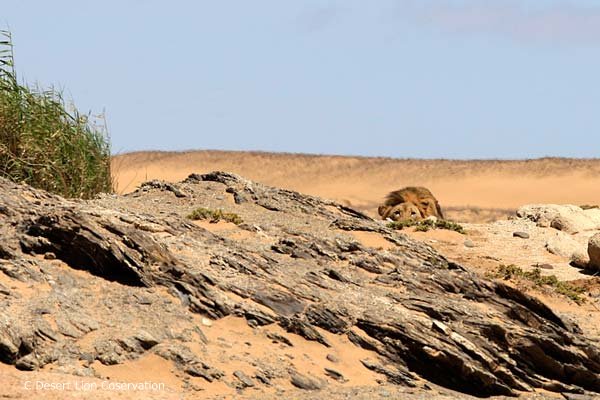 The home of the desert lions lies in Namibia’s Kunene Region (green circle):

Dr. Standers website www.desertlion.info informs us about the lives of some of the desert adapted lions. The website also allows us to benefit from a lot of interesting information, which he has acquired through years of research.

It was our mission to fit a lion of the Obab pride with one of the GPS collars TOSCO Trust had sponsored.

Some lions were already equipped with a radio collar, but they were to be replaced with GPS technology.

However, we had to find them with the help of the radio collars first. We had to realize that tracking lions with the radio system is all but easy.

It’s kind of like listening to signals of aliens in the depth of space.

TOSCO Trust (Tourism Supporting Conservation) supports Dr. Stander und his organisation Desert Lion Conservation as well as many other initiatives to protect Namibia’s unique natural treasures. TOSCO is based on the principles of sustainable tourism. 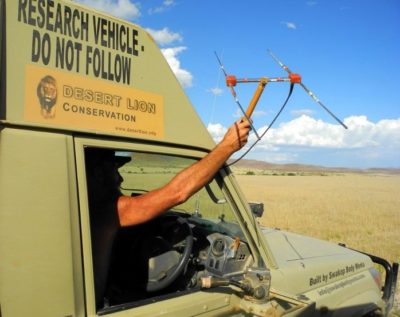 On plain land it would be comparatively easy to track lions with radio collars.

But the desert lions live in this beautiful wild land of the Kunene region, where grassy plains take turns with impressive mountain ranges, canyons and rolling hills. 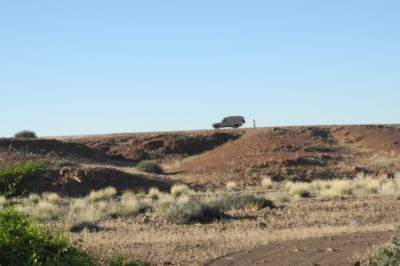 When we reached the territory of the Obab pride, Dr. Stander’s car was already standing on top of a prominent hill, from where he could pick up signals best. But there was no signal. We had to look elsewhere.

It had not rained here for a long time. Zebras, the lions’ favourite prey, were gone.

There was not a single animal anywhere. 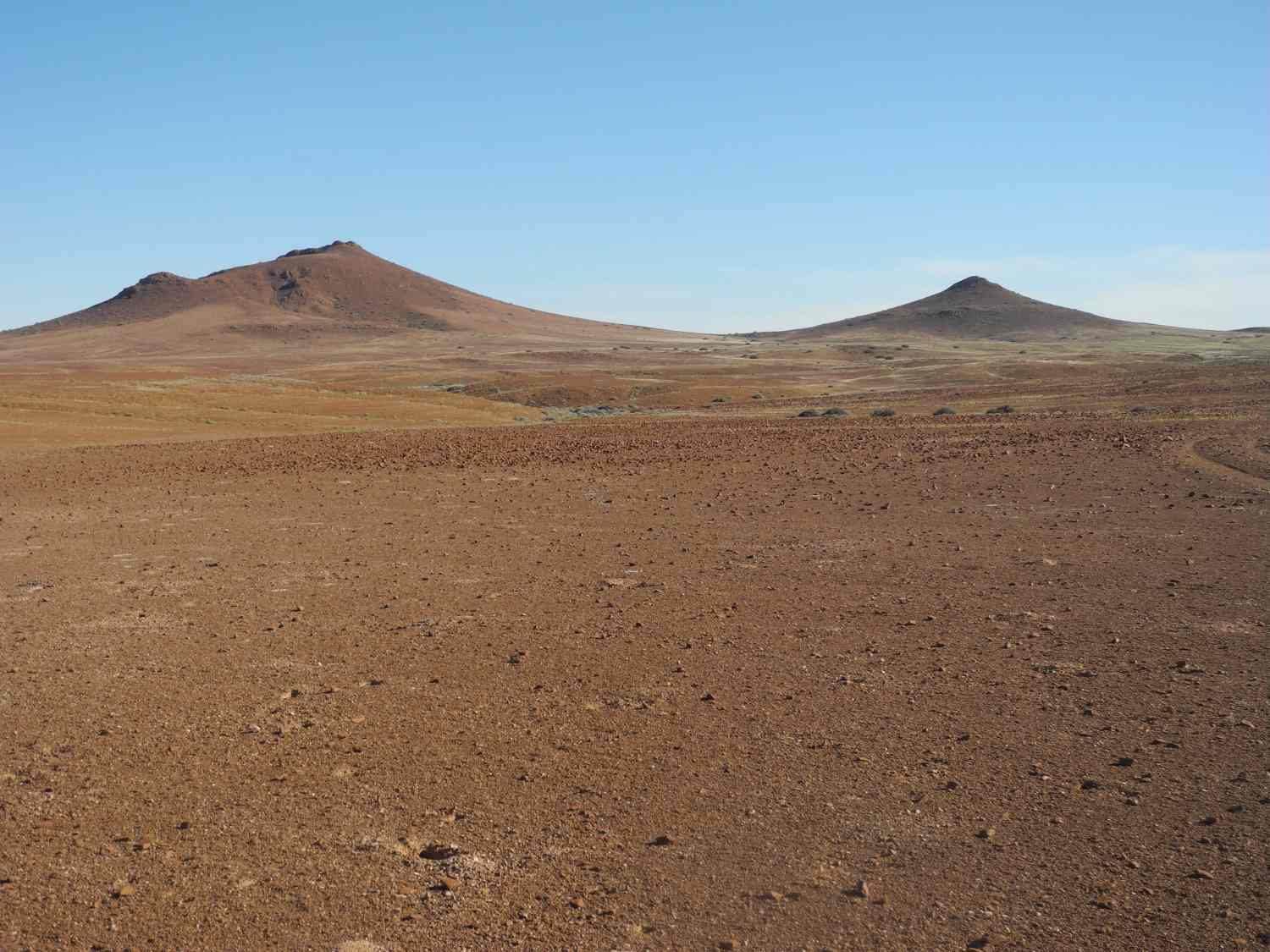 This map shows the territories of different prides:

What Do Lions Do When their Food has Gone

Rain is highly erratic in this part of Namibia – one valley can be green, whereas a few kilometres on there is only barren land. Game moves with the rain. And that’s the lions’ biggest problem.

Their prey somehow knows where it has rained and move there.

And suddenly all the lion food is gone.

In this situation, lions might resort to eating livestock. A desert lion can easily go without food for 2 weeks and can survive up to two months. But for a starved lion in this situation a donkey or cow crossing its path is, of course, irresistible.

You will learn more about the problems (and approaches to solve them) further down.

When the Obab Male almost got a new GPS Collar

With his drone Dr. Stander tried to find out where we might have to go to find the lions. But he found nothing.

But after some driving we picked up a signal.

That night, the Obab male almost got a GPS collar.

We found the dominant male of the Obab pride lazing under a Salvadora bush. We had ample time to observe him, while Dr. Stander was trying to get close enough to shoot the dart with the anesthetic.

But the lion suddenly got up as if on a mission. Dr. Stander could not approach him anymore and it was already getting dark.

Without having achieved anything, we made camp for the night, enjoyed the tranquil desert atmosphere and Dr. Stander’s camp fire stories.

When we went to bed Dr. Stander went off to try and find the Obab male again.

So close yet so far

He did not find him again.

So we decided to focus on the lionesses of the Obab pride. We found their signal but the terrrain was so inaccessible that it was impossible to get near them.

The desert lions walk vast distances, especially during the night.

Dr. Stander’s research has shown that they can move up to 70 km in one night.

A lion in Etosha might only walk this distance in a week. But there is far more prey available in Etosha than in the Namib Desert.

The desert lions have to find their dispersed and sparse prey in huge territories.

Consequently, chances are good that they could be in a different, more accessible area the next day. But we did not have the time to wait.

A change of plan was necessary.

How Can You Pass 12 Lions Without Seeing Them?

The Barab pride was close and Dr. Stander knew that they must have cubs, which he had not seen yet.

Picking up the signal was easy. Dr. Stander soon found the spot, where they had to be. He showed us where we should go, he would stay on the high vantage point to watch them from above.

We descended the steep hill into the dry river bed, excited to see the little lions soon!

But from above, Dr. Stander signaled us with his torch to come back. Why?

We had driven right past them without seeing them!

The lions had hid in the reeds and bushes, and when we were driving past they walked off in the other direction!

Did we see some lions in the end? Yes! Twelve of them! We saw them from the distance, they were walking along the driver river:

Will the Desert Lion Babies Survive?

We learned that if the cubs survive the first months, their chances of survival to adulthood are pretty good. The only real danger in this area is shortage of food. Infanticide (adult male lions killing another father’s cubs) is very rare here.

The Barab pride is a young pride and the only really stable pride in the whole desert lion population.

The mortality rate of male lions was unnaturally high, due to trophy hunting.

Therefore, most desert lion prides do not have a resident male.

But the Barab pride has, and even two of them! The fathers of these cubs were Geronimo and his coalition partner.

Trophy hunting is regulated, but once the cubs reach adulthood, there is another danger:

Many desert lions get shot or poisoned, when they come into conflict with humans and their cows, goats and donkeys.

The home ranges of the desert lions are in large parts not protected areas, like national parks, but communal farm land.

Thus, the lions share their home with humans and their livestock. 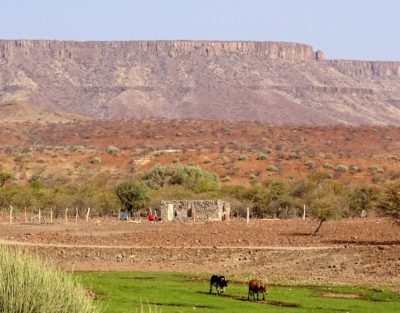 The last free-ranging lion population that is still growing

Still, Namibia’s Kunene region is the only place in the world where a free ranging lion population (outside national parks) is still increasing!

This is largely due to the fact that the local people here are included in nature conservation.

The desert lions will only survive if the local people and the lions can somehow coexist.

In former times, people did not live here permanently, but moved in and out of the area. Some decades ago, people got settled here and boreholes for water were drilled. Now people are here all the time, and so are their cows and goats.

Life is hard here for humans, too, and many would probably prefer better land, with more grass and less lions.

Strategies have to be found to avoid that lions are a danger for humans or their livestock.

Nature conservationists are trying to find ways so that the people can benefit from the lions.

The most successful strategy so far is responsible tourism.

Through tourism it was possible to generate income for the protection of the lions.

But more importantly, employment for the local people was created: in lodges, as lion rangers, tour guides, etc.

When people benefit, the lions are not only pests that steal valuable cows, goats and donkeys (these are the wealth of the people here).

When people benefit, they are more prepared to live with the lions on their doorstep.

But the corona crisis has put the achievements of the past years in danger.

Without tourism, jobs have been lost and there is not enough money to finance measures to protect the lions and the communities.

When it became dark, we had to put up camp again. We were dying for some food. Dr. Stander remained with the lions and joined us for a chat later.

And as always, when we went to bed, Dr Stander went back to the lions into the pitch-dark desert night. 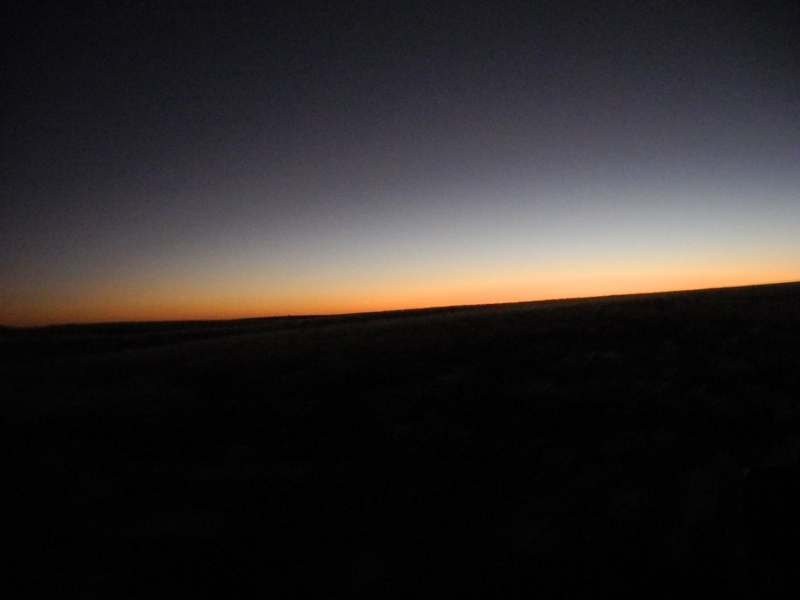 The two-part documentary “Vanishing Kings” accompanies a pride of desert lions for several years and records the happy, exciting, incredible and sad moments in their lives in overwhelming pictures. Vanishing Kings is a must for everyone who is interested in Namibia’s desert lions.

Would you like to contribute to the survival of the desert lions? Please support TOSCO (Tourism Supporting Conservation).

TOSCO assists Dr. Stander’s work and helps to mitigate conflict of lions and people. The aim is to allow them to share the same habitat peacefully. Essential for this are the lion rangers: the lion rangers are people from the villages employed to prevent that lions attack livestock and thus, to prevent lions from being shot.

Would you like to explore the home of the desert lions?

Explore Namibia’s almost pristine wilderness and deserts with us. With our experienced guides you will feel safe like with friends. Experience the home of the desert lions, and maybe meet its famous inhabitants.

This Is A Custom Widget

This Sliding Bar can be switched on or off in theme options, and can take any widget you throw at it or even fill it with your custom HTML Code. Its perfect for grabbing the attention of your viewers. Choose between 1, 2, 3 or 4 columns, set the background color, widget divider color, activate transparency, a top border or fully disable it on desktop and mobile.
Page load link
error: Content is protected !!
Cookie-Zustimmung verwalten
Wir verwenden Cookies, um unsere Website und unseren Service zu optimieren.
Manage options Manage services Manage vendors Read more about these purposes
Vorlieben
{title} {title} {title}
Go to Top